In my blog posts up to this point, I’ve discussed my reading and writing. (If you scroll back in time, you’ll find several posts on books – “On reading 100 memoirs in order to write one.”)  I’ll  twist here to discuss teaching. One of my favorite classes is Jumpstart Your Writing. I love to help students who are stuck, either because they lost their mojo or because they were too afraid to start their writer’s life. Here are 15 tips that help me and I hope my students as well.

15 Ways to Motivate Yourself to Write
1.) Set your alarm for 45 minutes. Anyone can write for 45 minutes. Almost always, I keep writing long after the alarm sounds
2.) Believe in the power of revision. We can’t begin to revise until we have something down on paper. From there, our job is to revise and revise and revise. Jennifer Egan said she revised A Visit from the Goon Squad 57 times. It went on to win the Pulitzer Prize.
3.) Turn off your inner critic. When your mind says, “This is trash. This is horrid, say to yourself, “It doesn’t matter how good it is now, because I’ll rewrite and rewrite.”
4.) Only show your writing to someone you’re comfortable with –who may or may not be your partner, your spouse, your child.
5.) Connect to a writing group, either in person or on-line

6.) Read 100 books of your genre
7.) Figure out your own writing bio-rhythm. Are you a night writer or a morning writer? Do you prefer writing at home or writing at the library or coffee shop? Do you need to write one hour a day (more or less) or do you prefer to write hours and hours at a time?
8.) Are you an outliner or a seat-of-the-pants writer? Or both? The more you know about your personal writing style, the easier it will be to write.
9.) Schedule writing time on your calendar.
10.) Learn as much you can about writing well. Takes classes, go to conferences, go to workshops, watch instructional or author panel You Tube videos.
11.) Develop a tough skin. Realize everyone gets rejections. Share your rejections with supportive people. When you receive a comment in a rejection (as opposed to a form letter) consider it a success. Respond to the comment and resend the query or manuscript.
12.) Participate in Nanowrimo in November through your library, Richard Hugo House, or other locations around the Sound.

13.) Make a personal commitment. How do you do that? Decide your own manner of making the commitment.
14.) Throughout the day, write notes on your phone with writing ideas for stories, scenes that you’ve watched on the bus, street or wherever. Write each of the scents you notice throughout the day.
15.) Write affirmations and post them around the house. “I finished my book. I published my book. I have an agent. I won the Pulitzer prize.”
16.) Watch other artists—singers, comedians, painters, in their struggle. Being an artist is a brutal business, so we all need to support each other. Be a good literary citizen: attend author and poet events, write reviews on Amazon and Goodreads, read interviews and learn about resources on http://www.writersconnection.org, and drop a note to a favorite author. Believe in yourself. If these artists can do it, you can, too.

To get water, we pulled a stick from this rock on the hillside 1/2 mile from home 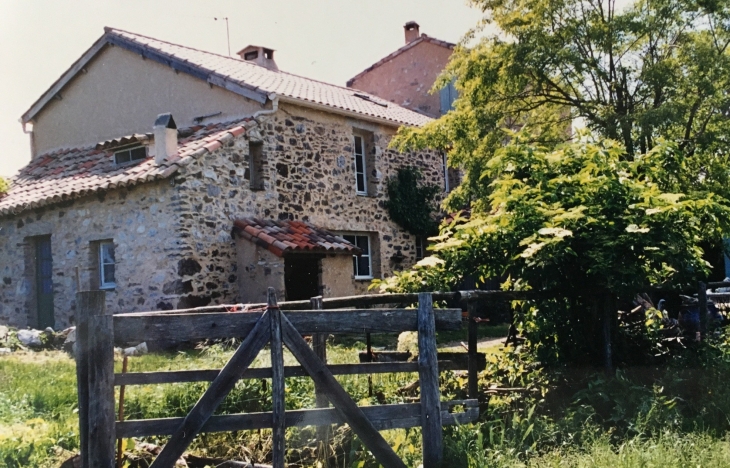 Our house. Note the overhang with corrugated metal: the toilet (1/2 wine barrel covered with two planks)

Ay_liz_a_bet_a with Baby, her favorite goat

Illusive and others with Mon Rosa in the background

With sheep as well as goats and cow. Eating at the barn means a day humans are celebrating  at the house. 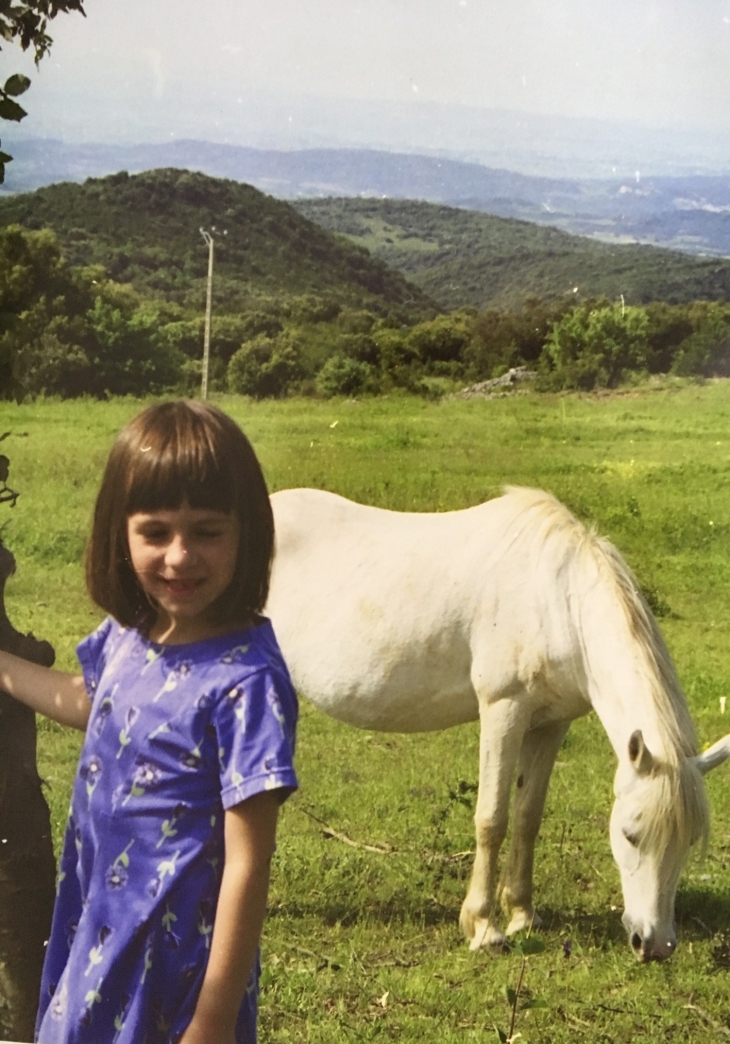 Twenty years later (2000): The land and beautiful Camargue horse look the same. My daughter in foreground.

Twenty years later (2000): No goats, but land is still beautiful. My niece, daughter, me, and Jacques.

Eight years ago, Carlene Cross advised writers to read one hundred books in the genre in which they wanted to write. I read one hundred memoirs, posted them on this blog, and five long years later Plicata Press published my award-winning memoir, A Long Way from Paris.

Writing a memoir is hard, excruciating at times, so I wanted to follow it with a “light” book. Perhaps a light mystery? When I finished my draft, however, my editor told me I had written women’s fiction.

“Women’s fiction?” Arrggh! I balked. Why not plain FICTION, rather than women’s fiction? There’s no corresponding “men’s fiction,” right? Of course, most fiction is men’s fiction. Or, certainly used to be. I honestly don’t have the stats.

I began a year-long investigation into “women’s fiction”- which I’ll refer to as “WF.” After my study, I concluded:

I studied this illusive “women’s fiction” genre to help clarify my own intention with my next books. In addition to the plays mentioned above, I resonated with the fiction of  Attica Locke, Joyce Carol Oates, Maria Semple and Anne Tyler. Blonde and An Accidental Tourist stuck to me like fly paper through 2017.

I also loved Lianne Moriarty’s books before Big, Little Lies became a smash hit because she writes in the new “up-market” category, stories which humorously touch on love, work, families, and affairs, but which then veer off into deeper issues once you’re hooked: spousal abuse, pre-natal depression, rape, class prejudice, and so forth. Add to my list, the jackpot. I recently reread Pride and Prejudice for the third time. Jane Austin gives WF prestige and satisfaction, with thoughtfully written books, funny, and profound. Yay, to all those Jane Austin fans who recognized this long before I.

In my search for the book I want to write, I decided upon a mash up of Joyce, Moriarty, Locke, and Tyler with a bit of Daphne du Maurier (Rebecca) thrown in. For four years, I’ve struggled to write the book that works for me –and then, hopefully, my readers. Finally, I am closer to a solution: I want to write a book that holds a mixture of fun and insight into women’s issues which, I believe, are the characteristics that helped make my memoir, A Long Way from Paris, become a success. So, readers, hold on to your seat. In a year of three, this light-hearted, thoughtful novel may appear on your favorite bookstore’s shelves.

E.C. Murray teaches Creative Writing at both Seattle Central College and Tacoma Community College. Her writing format focuses on three central areas from which all writing flows: character, plot and prose. Additionally, she speaks at writing workshops and forums from libraries to colleges as well as service clubs and community functions.  To book an event, contact her publicist C.R. Wissmann at crwissmann@gmail.com. 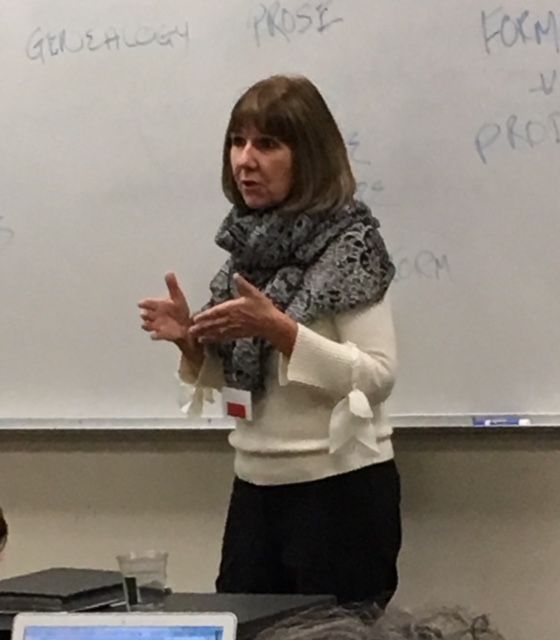 I loved your teaching style and was amazed at how much information was imparted in a fun, lively and open environment. DG

Thank you so much Elizabeth.  I greatly appreciate the instruction you gave us and the encouragement you gave me.

I really enjoyed your class. Although I have no plans to pursue writing as a career I did get a lot of pointers that will improve my essays. Thank you for your encouraging words regarding my work. CB

I … think you are such a great instructor who really shows your passion for what you do.  I was inspired when I took your first class and this class was such an excellent way to learn this wonderful craft of writing.  I now feel like I am on my way to writing my first book or memoir and I look forward to reading your next book! CJ

Thanks to you who’ve written thoughtful notes about A Long Way from Paris. I’ve loved the goat photos,  the stories of travels in France, some stretching back to World War II, and the honesty of those  who relate to feeling “less than,” not up to par, not good enough. That’s what memoirs are about: resonating with others’ hearts and souls, revealing the parts of ourselves we often prefer to stay buried.

A student of mine recently committed suicide. She didn’t know many others in our small class, but writing memoir is an intimate process in which strangers feel strangely connected. A knot grew in my stomach, puffed like yeasty bread, and I realized I’d denied dealing with her death—truly wrestled with and accepted it—until I had to face my other students. That’s what memoir is about. Saying aloud that which we’d rather hide away; confronting our emotions that aren’t actually demons, but difficult, often painful tugs on our heart that we’d prefer not see the light of day. And yet, by speaking out loud–and here’s where the cliché comes in –by speaking our truths—we become deeper, clearer, more empathetic beings and so, too, our stories. We become models for the people we touch. My next book is actually not a memoir. It is a mystery; a fairly light one indeed. Do you remember hearing about when Dylan was booed off the stage in Newport for switching from folk music to electric? Well, grandiose as it may sound, I feel a bit of kinship. Memoir is excruciatingly difficult to write. Next, I wanted something lighter. After all, Harriet the Spy was my favorite book growing up, I read every Nancy Drew book in fourth grade, and in college, if I felt depressed, I turned to Rex Stout. So forgive me as I switch to lighter fare. Soon you will meet Lori Orondo who’s at her wits end with her wayward son, Austin, and Amanda Perkins, a former rival from college, and Nicole Whryrll, the volatile friend and neighbor, all of whom are wrapped in the shooting of Scott, the charming pharmacy tech with a questionable past.

We all need relief now and then. You never know from whom you’ll find wisdom, but Mel Gibson (I know. Really??) said, movies should 1.) Entertain 2.) Educate 3.) Elevate. I hope the same for my books. And yes, they can even be a little fun.

Much gratitude to all. EC Murray